Once Upon a Time Season 5b 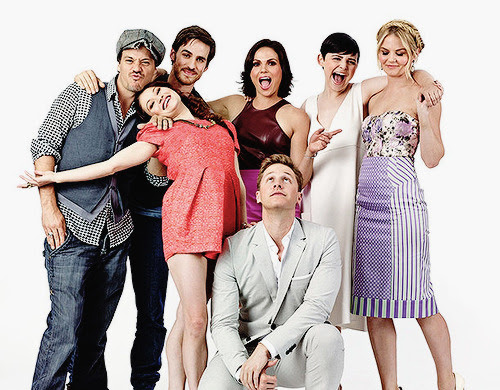 Once Upon a Time or fondly called OUAT is back after its hiatus. Season 5 has seen a lot, and I am not surprised to see that it has reached a season 5; I am still fixed and I am beyond excited that there will be a season 6! I am not 100% sold on all the writers do, but I have always loved fairy-tales and the twists are so much fun to join in on. I think one of my favorite things to do is fantasize about different plot twists and see if they fit. Usually my far out ones do not, but I do go with two: one twist that I could see them doing and one that is so far beyond the realm of possibilities it could lead to a crazy epic twist.

We are finally on to Season 5b and the first half portrayed a darker Emma and everyone trying to save her for once since she's become pretty good at saving everyone else. Although to be fair she has help saving everyone so it never is always just her: Henry and Regina being the top two, with an occasional help from her family and Rumple. I digress...season 5a focused on Emma being dark, but as much as I really think Jennifer Morrison's acting skills are out of the park; I felt a darkness lacking a bit. I'm thinking it was because she was not full on darkness, since she was one-half of a pair. I'm not sure how Killian did not realize he was the second, he was so good until he found out. I'm still confused by that.

Season 5b has them traveling to the Underworld to save Hook: Regina and Robin Hood, Snow and Charming (anyone else find it annoying they all call Snow, Mary Margaret?), Emma and Henry, and Rumple (but not out of the goodness of his heart). So far there has been some pretty gut wrenching starts and some surprising twists: Regina has now been the savior twice (she broke her second curse and saved Emma), and looks to be going for a triple.  Regina seeing both her Mother and Father and gaining some sort of closure with both; at least her Father was a huge closure, and for all she's been through she deserves that (even if she was the one who put him their). I am uncertain why little Henry had to be their, but I'm assuming for a bit more dramatic affect. "Henry meet Henry" it's almost saying: see I did love you with all my heart. Although that was already clear when she ripped out his heart for revenge, but you know. Seeing Neal again, if only for a brief moment was beautiful. Emma and Neal's chemistry has always been amazing, but I just wished for him to see Henry too. A family moment would have been extra bonus. He warned her not to go to the Underworld (like she was going to jump off the boat once they landed and swim back: okay she could have told the boat to turn around), but of course she is going to: and he should have known that. She has always been brave and stubborn. It's not in her nature to give up, even if emotionally she flees. Seeing Hook even for a moment, must have strengthened that resolve. Peter Pan showing up (why isn't he old?) to see his dear son and act like he wants to start over. I can't wait to see what comes next for the rest of season 5b!

With that said, I have some theories on that:

1. What if Hades planted that memory to get Emma to turn back and not save Hook? He did say he would do anything to not lose a single soul. He already lost Henry thanks to Regina and Cora.

2. Peter Pan has not changed, and will possibly take-over Rumple (if he can) soul or he is going to force Rumple to choose and he'll choose Emma or Henry. Although Emma is supposed to be so powerful that nobody can rip out her heart and supposedly was the "best" dark one due to her magical abilities. (I believe she is the most powerful if she ever got the chance to truly be 100% dark and 100% taught to use her abilities: she gave up). Henry because he'll still see him as a threat now that he is the dark one again.

3. Everyone will join together to free everyone from the Underworld, but more than one will be revived and not actually move on from limbo. I'm not sure how or why.

4. Emma won't be able to split her heart to give to Hook because she is all-powerful which makes her heart extra attached? Not sure if that makes sense.

*Any other theories? Or anything to add?
No comments: